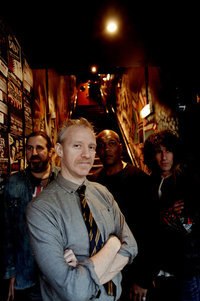 You think you know the Spin Doctors. Think again. When the legendary New York quartet release If The River Was Whiskey through Ruf Records, casual fans will discover the secret past the hardcore have never forgotten. To the wider world, the Doctors might be the multi-million-selling icons behind hits like Two Princes and Little Miss Can’t Be Wrong, not to mention the classic Pocket Full Of Kryptonite. But in 2013, Chris Barron (vocals), Aaron Comess (drums), Eric Schenkman (guitar) and Mark White (bass) are reconnecting with the flat-broke twenty-somethings who scraped for dollars at the sharp end of the Big Apple blues circuit. The Spin Doctors have come full-circle.
“We were four guys in our twenties,” remembers Aaron of early days in the late-’80s, “and our goal was to write our own songs and make a living doing it. The blues is such a big part of our roots, but one of the reasons we came up with such a big catalogue of blues songs back then is that we’d play these downtown blues bars in New York. You were supposed to play blues covers… but we were actually playing our own songs!”