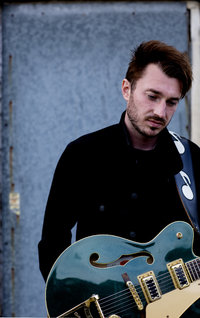 The songs he laid down at Buckingham’s Echo Studios in September 2020 for Pizza Man Blues  are cut directly from the younger musician’s life and blur genres from rock, soul and blues to country, folk and indie. “I wanted a ‘Krissy Matthews’ vibe to this album,” he shrugs. “I don’t like to box myself into restrictions of where I can and can’t go, so I just write and see what happens. This was the result.”