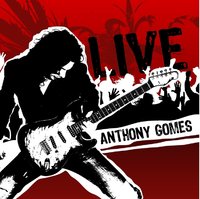 Growing up in Toronto, Canada, Anthony’s musical sojourn began unexpectedly. “For my 14th birthday, I wanted a computer and I was doing well in school, so my Dad got me a guitar as a surprise. Then, I surprised him. I fell in love with music and became very dedicated.”

Like many teen boys, his fire was fueled by what he calls, with a twinkle in his eye, “testosterone rock”. His first stage appearance came in high school on band night, his band cranking the likes of Deep Purple and Led Zeppelin. He also was inspired to start writing original songs. The band won a local radio station contest, earning prize money and a chance to open for Bon Jovi, but Anthony decided it wasn’t his path to follow. “I quit the band before that. My heart wasn’t in it. I wanted to get more into a roots thing.”

Anthony headed to the Us ain the late 1990s, first settling in Chicago and winning Buddy Guy’s Legends 1998 “Best Unsigned Blues Band” competition. After several years Gomes traveled down to Nashville for yet another perspective on music. He explains, “I moved to Chicago to be a better musician and moved to Nahville to learn more about songwriting and be in that community.”