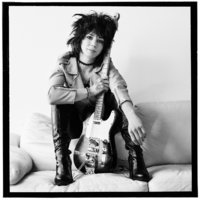 Sky knew she wanted to play guitar “right then and there” after a 2014 show near her hometown of Buzet, and she soaked up the influence of Rory Gallagher, Albert King and Stevie Ray Vaughan. But it was two years before she took a leap of faith, leaving her hometown and a career as a pastry chef to brave the music scene of Croatia’s capital city, Zagreb.

Even then, it took all Sky’s rebel spirit to fight her way into contention. The eyes of the music industry rarely turn towards Eastern Europe, and for all its merits, her homeland is no rock ‘n’ roll launchpad (“Everything is a challenge in Croatia”). But talent wins out, and label boss Thomas Ruf’s faith in Sky was quickly repaid by Bad Penny, plus Blues Caravan appearances that challenged tour veterans Mike Zito and Bernard Allison to raise the bar.