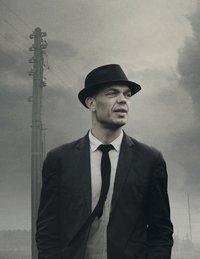 Thorbjørn Risager and his band are light years away from any dream state. They belong to the top strata of the Scandinavian blues scene, making themselves heard like few others. But hey, how can it be that an eight-man band, which has been around for ten years, playing blues, rock and soul, is releasing its eighth album, selling lots of records and plays nearly a hundred gigs a year – most of them outside Denmark? What is it that these guys have that makes their audience go on growing and keeps the pot boiling? As Thorbjørn Risager says, it’s due not least of all to the fact that all the band members approach their job with a hundred-percent professional attitude. Everyone contributes to the common cause, and each has his own task in making the result a success.
Still, this doesn’t explain everything. Thorbjørn Risager is the natural midpoint in the group. And he happens to be one of the best blues singers Denmark has ever reared. His raw, expressive voice is the fuel that powers the band’s mighty blues motor.
But more than a formidable voice is needed for this vehicle to stay in the fast lane. The songs furnish the rich, thick oil lubricant that is topped up regularly. The rhythm section are the pistons that never fail, while the two guitars supply the masterly electrical features. And then there is the horn section, providing the elegant design that rounds out this blues vehicle’s roadworthiness and comfort.