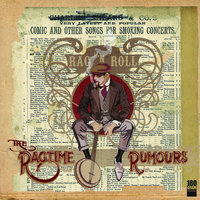 Calling all jaded music-lovers. The Ragtime Rumours have come to prick up your ears. In an era when the dead-eyed music industry clings to tired formulas, these time-travelling Dutch visionaries tear up the rulebook – and that rebel attitude is all over Rag ’N Roll. Anything goes on this revolutionary debut album, as the ghosts of Robert Johnson and Django Reinhardt meet the influence of Tom Waits and Pokey LaFarge, driving eleven self-penned originals and one traditional that could have been written in 1920 or 2018.“We combine our inspiration for ragtime music with the styles of blues, gypsy jazz and rock ‘n’ roll,” explain the band.“We call it rag ‘n’ roll…”