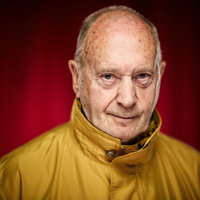 Born in the Midlands city of Leicester, he told the Rock Legacy site that “I wasn’t interested in the English version of rock ‘n’ roll. All my heroes were American, like Little Richard, Chuck Berry, Eddie Cochran, and Gene Vincent – that was the real stuff.”

The 24-year-old singer joined The Farinas in 1966 and forged a dynamic writing partnership with lead guitarist Charlie Whitney. But the critical juncture came when the band renamed themselves, Family, moved down to London, and dreamt up a distinctive sound that swirled jazz, blues, folk, prog, and psychedelia into their classic 1968 debut album, Music In A Doll’s House. “We didn’t try to be different,” Chappo once shrugged. “It was never calculated. It was as naive and as honest as that.”

At the heart of it, all was Chapman’s extraordinary vocal. As a young singer, he had started out tipping a hat to those US pioneers, “I thought I was just singing like Little Richard or Ray Charles.” Yet his voice grew into a sound unlike anything else on the UK scene, swooping from a throat-flaying holler to a soothing balm, always with that unmistakable vibrato, and delivered with almost maniacal intensity on the stage. It was a decisive factor in Family’s ascent to the top ranks of the British psychedelic movement. “Being part of the ’60s underground was special for me,” reflects Chapman. “I felt I was a member of a new world order – which, of course, I was.”

Cherished by transatlantic fans, championed by DJ John Peel, and hitting UK#13 with the “Burlesque” single from 1972’s acclaimed Bandstand, Family released seven albums before disbanding in 1973. Chappo didn’t miss a beat, partnering with Whitney in Streetwalkers: a tougher Americana-influenced vehicle whose albums included 1976’s hit, Red Card. “The name had nothing to do with hookers,” he reflects. “That was the input of shabby managers.”

By 1979, this prolific singer-songwriter was ready to strike out solo with the Chappo album, and over four decades later, Life In The Pond ties all the threads together. Writing alongside Palmer – with stunning guest guitar from long-term collaborator Geoff Whitehorn – this latest album finds Chapman’s voice in vintage form and his musical radar more receptive than ever.