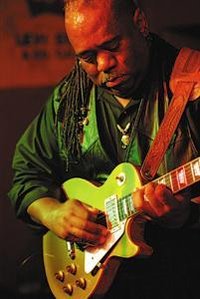 Michael Hill, a Bronx-raised guitarist, singer and songwriter, took his earliest inspiration from the sounds of Jimi Hendrix. His other songwriting influences include socially conscious artists like Marvin Gaye, Bob Marley and Curtis Mayfield.

After seeing Jimi Hendrix play on five occasions around New York City, including at the Woodstock Festival, Hill knew what he wanted to do with the rest of his life. He began playing guitar in 1970, and was soon playing out in rock and soul bands by 1972. He took cues from guitar players including B.B. King, Buddy Guy, Albert King and Carlos Santana, and his style is a comfortable mesh of all these, plus his own touch. Reading the books of Toni Morrison, James Baldwin and other black novelists, Hill began writing songs that spoke about socially relevant subjects as well as more traditional blues topics.