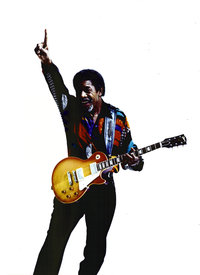 Born in Widener, Arkansas on August 17, 1939, Allison spent his formative musical years in Chicago jamming with the West Side's best, including Magic Sam, Otis Rush and Freddie King. His first recording, Love Me Mama (Delmark, 1969), is considered a blues classic. Allison came to national prominence with blistering performances at the 1969 and 1970 Ann Arbor Blues Festivals, wowing young rock Fans with his scorching guitar solos and soulful vocals. He became the first blues act to sign with Motown records in 1971 subsequently releasing three records for the label. He toured nationally throughout the 1970s before relocating to Paris in the early 1980s where he continued to release albums (many issued only in Europe) and tour incessantly, eventually becoming a European blues superstar.

Since signing with RUF in 1994 Allison launched a major American comeback in association with Alligator Records. 1994's Soul Fixin' Man / Bad Love, 1995's Blue Streak and the new release, Reckless,  provided a launching pad for Allison and his searing brand of hard blues. Besides his recent W.C. Handy Awards, Allison scored a host of Living Blues Awards (including 10 last year and three more this year), won five Handy Awards last year and was featured on the covers of the three major national blues publications, Living Blues, Blues Access and Blues Revue (who dubbed him 'The New King Of The Blues'). He appeared on Late Night With Conan O'Brien, National Public Radio's All Things Considered, and The House Of Blues Radio Hour. Reckless has been on the Billboard Blues Chart for 12 weeks, and has topped the Living Blues Radio Charts since May.