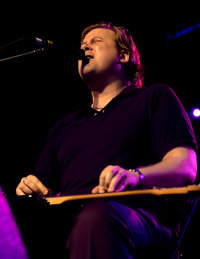 Blind since early childhood, he picked up his first guitar when he was three, and began to play it flat across his lap, “accidentally” devising the revolutionary technique that became his signature style.

His parents — he was adopted at an early age — encouraged him in every way possible, and helped him discover the joy and the depth of early American music. He played his first gigs when he was six, and by his teens had played a variety of music in a number of different bands.

By 1985 he was playing — and singing — electric blues at Grossman’s, a happily seedy bar near Toronto’s Chinatown. Within two years, he was joining B.B. King on stage at a festival in Vancouver, had become friends with Stevie Ray Vaughan, made a series of demo recordings, and cut a deal with the Arista label, headed by the legendary Clive Davis.

The first record, See the Light, was released in 1988, and a starring-role in the movie Road House (opposite Patrick Swayze) gave his career an international lift.  The first record also had one other element: A smash hit single — the John Hiatt/Fred Koller song “Angel Eyes,” (also covered by such hardcore country groups as New Grass Revival), marked by excellent and expressive vocals.

Two years later, a second album, Hell to Pay, was released, and this one featured guest appearances by two other great guitarists, George Harrison and Mark Knopfler. Alas, a third album, seen as a “new beginning” by Healey’s American record company was the beginning of the end of the Jeff Healey Band’s run, at least as far as recording was concerned.

Working hard, he had learned a new instrument and became an accomplished trumpet player, modeling himself on his all-time musical hero, Louis Armstrong. Two superb traditional jazz albums followed: Among Friends was released in 2002 and Adventures in Jazzland came two years after. Both featured Jeff on guitar, trumpet, and valve trombone — and many of the musicians who came together to be renamed Jeff Healey and the Jazz Wizards.

Healey's death came a month before the release of Mess of Blues, which was his first rock/blues album in eight years