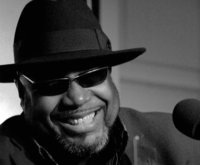 I felt like a little boy, my stomach was twisting, my heart beating like a drum. I wanted to sing so bad, even though I had never sung in a band before.

To make a long story short, somehow I ended up on stage that night, singing the blues

in a small club called “Wüstenstätte”.

I started working with many different bands. I wanted to learn as much as I could about this new thing that I found. I wanted to see how it fit in with the Soul, Funk and Gospel that I grew up with.

I saw right away that Blues was the Root, the foundation of the Soul and Funk that I grew up listening to. It is so close to Gospel like a brother, like a first cousin.

So after singing in a few blues and soul bands for some years,

I started a project  called “Back to the Roots”, Acoustic Blues. Just me and a guitar player Wolfgang “Doc Fozz” Feld. He was the bass player in one of the bands I had

We decided to write some songs, start a duo you know, just keep it simple.It worked out pretty good, we had a lot of fun. So we recorded our first CD together “My Day Will Come” 2004.