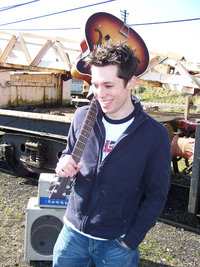 Based in Leicester began playing guitar at the age of 8, teaching himself to play from old blues records and listening to the recordings of the first wave of British blues heroes: "Eric Clapton was a very big early influence" he told Blueprint Magazine "that's where I learnt a lot of my basic solo stuff from. That's where I got the framework of my lead guitar work and you can hear a few phrases even now."

He played his first semi-pro gig at age 13 and by 1994 when he visited Cali­fornia, was "sitting in" with a West cost blues band and playing support to Coco Montoya's new band at the famous Lou's Bar at Pier 49 in San Fran­cisco.

As for many other young players, Stevie Ray Vaughn was also a major influ­ence, though, as Aynsley told Blueprint, "I have always tried to be an indi­vidual and do my own thing. I'd rather not join the queue to do the same as everyone else." That individualty has found him happily playing acoustic country blues as well as the "spine tingling" electric solo that have quickly be­come his trademark.