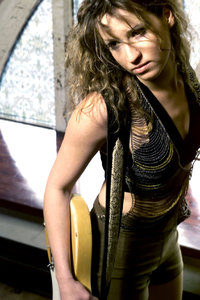 Ana Popovic is a gritty, earthy blues rocker who has been directly or indirectly influenced by artists like Koko Taylor, Etta James, Ruth Brown, Esther Phillips and Tina Turner, but she isn't from Chicago, Memphis, New Orleans, or anywhere else in the United States.

The singer/guitarist grew up in Yugoslavia, an unlikely place for someone to learn to sing and play the blues. But in fact, that was exactly where she became interested in American blues, rock, soul, funk, and jazz. Popovic was born in Belgrade, Yugoslavia, on May 13, 1976, when Eastern Europe was still dominated by oppressive communist regimes. As a teenager, she not only learned to sing blues and rock, she also learned to play guitar and was influenced by Elmore James' electric slide guitar techniques.

Popovic was in her late teens when in 1995 she formed her first band, Hush.