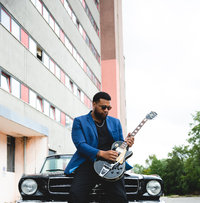 Since 2007, the Mississippi bandleader has blazed a reputation in the award-winning Homemade Jamz Blues Band. But when it came to his solo debut, Perry took a leap of faith and trusted his talent to land him safe on the other side.

Rewind to 2007, and the singer/guitarist was just thirteen when the Homemade Jamz Blues Band took second place at the 23rd International Blues Challenge in Memphis. Already, the lineup of Perry and his siblings showed a ferocious musicality and emotional maturity that burnt down the house. “I learned more about life and the world while playing blues all over than I ever could in school,” he recalls. “And that knowledge has made me grow up faster, something I’m thankful for.”

A decade later, life’s triumphs and blows have made Perry an even more eloquent songwriter, able to capture human truths with his soulful guitar work and that fathoms-deep vocal.

Wherever the blues scene goes, expect Ryan Perry to be at the head of the pack, still addressing age-old truths, but serving them up with a vigour and vision that chimes with fresh listeners. “The new generation of the blues is here now,” he nods. “And it’s here to stay…”