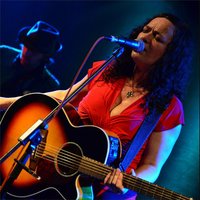 Meena was born 1977 in a small catholic upper austrian village as the third child of a master electrician and his wife, a woman with a suprior altruistic attitude towards life. In summer she walked around barefoot, sheltered among cows, meadows, trees and proud of her scratched knees. When she was three Meena had her first encounters with ski, being pushed down the hill. “My people successfully tried to get me into church which was easy because I liked the sound of the organ. And later, I was enamoured in an altar server. My mother taught me a lot during my girlhood. The world is big, she said. And my dad told me to look for a safe place on earth.

When Meena learned to speak she immediately was taught how to sing. Grandpa played the zither, mother and sister sang together with her. Good old folk from upper austria, you know. So I learned - among other things - musical harmony and polyphonic singing from early on. I wrote my first songs being seven years old. Music was something quite natural in our everyday life and far away from commercialism. Just like eating and sleeping, music was part of our life.“