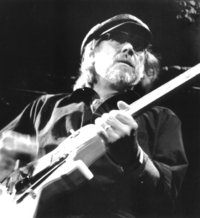 " ... I knew to play from the heart. When I feel something, my fingertips are just tools to express what's in my heart, not the other way round..."

Confessing to be "fourty-something," James Solberg was born in Superior, Wisconsin. Attending elementary school and Junior High in Eau Claire, Wis­consin, he moved with his family several times. At one point they shared a duplex with Robert Zimmerman (Bob Dylan) and his family, in Hibbing, Minnesota. At age 7 James' older brother Chuck, "an incredible blues barrellhouse piano player", showed him some basic guitar chords. James also played violin and five-string banjo, he claims to have gotten his vibrato from the violin and his finger picking styles from the banjo.

In 1963 Solberg began his musical career playing in a top 40 radio band. While other bands were playing "sissy" music by the Beatles, Solberg's Band was playing cover's by the Animals and the Rolling Stones. It was through the music of the Stones and the Animals that James was introduced to the music of Muddy Waters and Howlin' Wolf ... that's how he discovered the Chicago Blues scene. At age 15 James quit school and headed for the source of music he loved most ... Chicago! Soon he was hangin' out with and jammin' with Eddie Taylor, Big Walter Horton, Jimmy Reed, Johnny Young and others.

In the early 70's, Solberg moved to Milwaukee, Wisconsin. 1971 - 1973, James was playing with his own band, Dynamite Duck (Dynamite Duck was the first Blues band to be booked by fellow Wisconsinite, and current Blues booking and management mogul, Mike Kappus). '74 and '75, it was The Solberg Brothers Band, with brother Chuck on piano. Also during this time James began a relationship with Luther Allison. An immediate band was formed between the two guitarists based on mutual admiration and a love of the Blues! Inevitably, James Solberg became Allison's Band leader .... a role he would fill for the next five years. In 1975 Luther Allison, recorded "Night Life" with Solberg for Motown Records. In 1978 came "Live In Paris", (re-released on RUF Records). "Live In Paris" outsold any Blues album released in Europe! In the late '70's Solberg also did some on-again, off-again touring with John Lee Hooker.

1979, 80, and 81 further cemented James' reputation as one of the top Blues guitarists in America, performing and recording with Milwaukee's legendary, Short Stuff. With Short Stuff Solberg recorded "Talk Is Cheap" for Third Coast Records.

Thanksgiving Day 1981, worn out, dissillusioned with the music business, and heavily addicted to drugs and alcohol, James retired to the Wisconsin North Country for a long rest. During this time his intense interest in Harley Davidson and Indian motorcycles, led him to become a machinist, with this skill he could design and make his own motorcycle parts. He soon landed a job as a mechanic at a local Harley Davidson dealership.

In early 1993 an old partnership with his friend Luther Allison, who had been living in Paris, was renewed. James met Luther at Ardent Studios in Memphis, to assist in the recording of a new record. The intention was to put Luther Allison over the top and re-establish his stature in the U.S. The recording was "Bad Love"/ "Soul Fixin' Man". This album not only had James playing guitar, but also writing the material, arranging and co-producing the entire recording with producer Jim Gaines. "Bad Love" was released in Europe on RUF Records and in the U.S. licenced to Alligator Records as "Soul Fixin' Man". In 1994 Luther Allison asked James Solberg to be his band leader. In addition to touring the U.S. and europe with Luther, James managed to find time to record his debut solo album "See That My Grave Is Kept Clean", released on Atomic Theory / Flying Fish.

1995 was the year Solberg wrote, co-produced and played guitar on Luther Allisons "Blue Streak" album. "Blue Streak" released worldwide on RUF Records and on Alligator in the U.S. In 1995 Solberg toured the U.S. with Allison promoting "Blue Streak". In 1996 "Blue Streak" won two W.C. Handy Awards, including "Album of the Year" and "Song of the Year". The "Song of the Year" award was for "Cherry Red Wine" (U.S.)/ "Watching you" (Europe and rest of the world) a song co-written by Allison and Solberg, and is soon to be released by Johnny Lang. In 1996 James recorded his second album for Atomic Theory, "One Of These Days". Critics touted "One Of These Days" as one of the best releases of the year.

In 1996, James wrote, co-produced, arranged and played guitar on the very successful Allison CD, "Reckless". "Reckless" was released worldwide on RUF Records and in the U.S. on Alligator. Solberg spent much of 1996 touring the U.S. and Europe, promoting "Reckless". In early 1997, Solberg produced, co-wrote and played guitar on the Sandy Carrol CD "Memphis Rain". The CD was released on the Inside Sounds/Memphis label. Also in 1997 James Solberg with Luther Allison won a W.C. Handy award for "Band of the year". They toured the U.S. and Europe intensively, in support of "Reckless".

In August of 1997, Luther Allison died of cancer. Two months after Luther's death, James was in the studio writing and recording his third solo album, "L.A. Blues". Confronted with the loss of Luther Allison at every turn, Solberg found this experience the perfect vehicle to speak about the loss and also continue his own musical growth. "L.A. Blues" is Solberg's farewell to Allison. "L.A. Blues" will be released September 1, 1998 on Ruf Records. In early 1998, the album Solberg worked so hard on, "Reckless" was nominated for a Grammy Award for "Contemporary Blues Album of the Year". At the 1998 W.C. Handy Awards, for the second year in a row, the James Solberg Band won the "Band of the Year" award. The "Album of the Year" award went to "Reckless". Also early in 1998, James arranged, played guitar, and wrote one song for Deborah Coleman's September '98 release on Blind Pig Records, "Where Blues Begins".