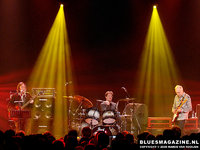 Jack Bruce and Robin Trower for the first time performing live! The news spread like wildfire, the sensation was perfect.
The legendary Cream bassist and singer, all his life striking new paths in blues and jazzrock, and the immense talented guitarist of Procol Harum fame who left the chains of 5-minute-pop behind him very early and who never followed any mainstream cliches: Both musicians have written history in rock for more than 40 years.
It was at the beginning of the 80s when they first worked together in a studio with two remarkable records resulting (B.L.T. 1981 and Truce 1982), but the fans had to wait for another meeting of the titans 27 long years: It was not until last year when "Seven Moons" came out.

The Veterans had formed a power trio; together with the a few years younger drummer Gary Husband (Level 42, Gary Moore, John McLaughlin), they recorded exclusively own material. Trower had come up with some basic ideas and Bruce and he worked them out: Fine bluesrock painted in psychedelic colours und wonderful sounds - a record transporting the living spirit of the creative seventies in to the third millennium. "Seven Moons" is the third joint venture of two aged musicians - and it is their masterpiece.