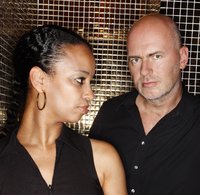 1984 was the year, as Constanze and Thomas met at first each other. It was in a band with three (!) female singers, two guitarist, one keyboarder and one bassplayer at Leipzig. This Line-Up leads on to suspect that it won’t be very successful. So they split up after only one public show. Constanze and Thomas stood still in contact for the following years as Constanze was touring with the famous “GDR” rhythm & blues band “Mr. Adapoe” and Thomas starts his career as a successful guitarplayer on the classical stages. But Thomas stopped his classical career with a last concert at the Berliner Philharmonie, to play the music which he really love. And so, Constanze and he founded Friend’n Fellow. And their first show in Spring 1991 was the official birth of these remarkable duo. And now, 20 years and over 100.000 sold albums later we can describe them as follows:

The reduktion to the essentials is the brand of Constanze Friend and Thomas Fellow. And after playing nearly 1.500 shows in the whole world, among with Ray Charles, Al Jarreau or Luther Allison, they are one of the top acts and the most succesful project in this style of music in Europe.