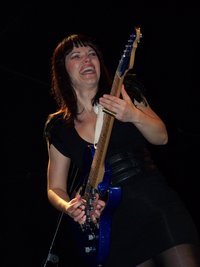 Born into a musical family in the small town of Kuopio, Lyytinen quickly emerged as an artist to watch in her native country. From the beginning, she has combined elements of folk, rock, jazz and pop into her swampy, rootsy blues. Her 2005 international debut, entitled Pilgrimage, gave audiences outside of Finland a first taste of her spirited live performances, and led to a number of successful appearances in the United States.

For her solo follow-up for the Ruf Records label, Dreamland Blues, Erja returned to the USA to record with David and Kinney Kimbrough (sons of Mississippi blues legend Junior Kimbrough) as well as long-time musical partner Davide Floreno. The album was voted "Best Album of 2006" by Finland's YLE Radio Suomi 'Bluesministeri.' After two years on the road, she returned with Grip of the Blues in 2008. The album mixed hard-edged blues with modern R&B and showcased Lyytinen's knack for writing delicate, poppy melodies.