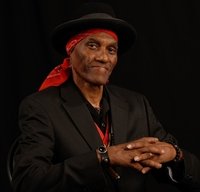 Cyril Garrett Neville (born October 10, 1948) is an American percussionist and vocalist who first came to prominence as a member of his brother Art Nevill's funky New Orleans-based band, the Meters. He joined Art in the Neville Brothers band upon the dissolution of the Meters.

He has appeared on recordings by Bob Dylan, Robbie Robertson, Edie Brickell, Willie Nelson, Dr. John and The New Orleans Social Club among others.

In 2014, Neville was nominated for a Blues Music Award in the 'Contemporary Blues Album of the Year' category for Magic Honey.