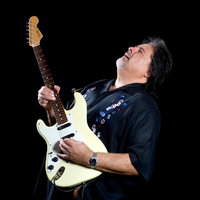 Over the course of his 30-year career, guitarist and vocalist Coco Montoya's explosive guitar playing and soul-driven voice have propelled him to the upper reaches of the blues-rock world. From his early days as a drummer to his current status as one of the top-drawing guitarists and vocalists on the blues-rock scene, Montoya has forged his reputation through years of hard work and constant touring. And it all started with a chance meeting in the mid-1970s with legendary bluesman Albert Collins, who offered Montoya a gig as his drummer. Albert took an immediate liking to Montoya, becoming his mentor and teaching his new protégé secrets of the Collins "icy hot" style of blues guitar. Five years later, John Mayall happened to catch Montoya at a jam session and was blown away. This led to Montoya's touring the world for ten years with the legendary Bluesbreakers. Since stepping out as a bandleader in 1993, Montoya has released four solo albums including his newest (I Want It All Back, RUF 1153) and has performed non-stop at clubs, concert halls and major festivals all over the world. At every show, fans' jaws dropped, and critics raved about Montoya's mind-bending guitar licks and impassioned vocals. "The fiery blues that issue forth from Coco Montoya's guitar are awe-inspiring and boogie requiring," shouted The Village Voice. "Blistering, pure blues," cheered Blues Revue.