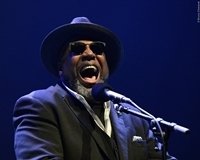 I want people to feel me says Wilson, I want to take them by the hand and take them back home with me, down the dirt roads of North Carolina.

I felt like a little boy, my stomach was twisting, my heart beating like a drum. I wanted to sing so bad, even though I had never sung in a band before. I felt like, “this is it”, this is me, this is my music.

To make a long story short, somehow I ended up on stage that night, singing the blues in a small club called “Wüstenstätte”.