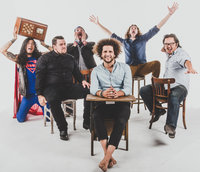 You can’t miss Andy Frasco. The electric-shock hair. The megawatt charisma. The golden lungs, magic fingers and party-starting songs. When this twenty-something Californian bandleader takes to the stage with The U.N., you’ll get an adrenalin-shot of pure escapism. “We want people to be happy,” explains Andy of his musical mission statement. “To smile at their faults, love life for what it is, and follow the beat of your own drum.”

“I’m trying to bring a different interpretation of what people think the blues is,” says Andy. “Not all blues need to be sad and lonesome. I love acts like Wilson Pickett, Marvin Gaye, Buddy Guy, The Band, Samantha Fish, Houndmouth – all these acts that really made the blues their own style.”

Andy Frasco & The U.N. are surely destined to join that pantheon of greats. The band was formed in 2007, yet the frontman’s own backstory goes back further still, to his roots as a precocious 16-year-old manager/promoter on the West Coast. “I was sneaking into rock clubs trying to sign the hip new LA bands,” he remembers, “making business calls at lunchtime in my Math teacher’s classroom, just so they would believe I was older than 16.

“I was living two lives,” he adds. “But it brought me the foundation to eventually book myself for the first five years of my career when nobody really gave a shit about me. I knew I needed to earn their respect, so I told myself I’m not going to stop until I see my dreams come true. I’ve been on the road for ten years straight, playing over 250 shows a year, through six countries, basically living in a van."