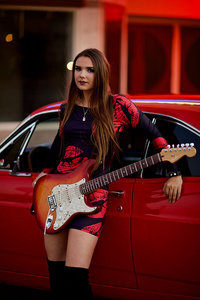 “Ally is the future of the blues and the crossover music of American roots-rock,” nods Mike Zito. “She is Texas Honey.”

That live punch was captured on No Glass Shoes (2016) and Puppet Show (2018): the latter dubbed “exceptional” by Blues Rock Review as it scaled the Top 10 on both Billboard and iTunes Blues Charts. Meanwhile, the ETX Awards mounted up in categories including ‘Best Female Guitarist’, ‘Blues Band’ and ‘Album of the Year’.