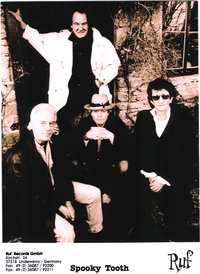 The Spooky Tooth history in brief. Formed in 1967 from the ashes of psychedelic rock band ART, who recorded one album "SUPERNATURAL FAIRY TALES" for Island Records. Prior to this they were an R&B/Blues outfit known as the V.I.P.'s, who were quite successful in Germany and France. With the addition of american keyboarder/vocalist Gary Wright, Spooky Tooth were born. During their seven year career they recorded seven albums. Their first album "It's All About" was certified gold, their second, "Spooky Two" is certified platinum. Their second album also spawned their most popular radio and concert numbers. "Better By You, Better Than Me" (later covered in 1977 by JUDAS PRIEST), "Waiting for The Wind", "That Was Only Yesterday" and the ever-popular concert fave "Evil Woman" which was their showcase.

Well known for their growling Hammond Keyboard Style, all seven of their albums charted in BILLBOARD'S Top 100 LP's, between 1969 and 1974, and every band member went on to successful careers either as solo performers or members of other acts. Vocalist Mike Harrison (*09/30/1945) recorded three solo albums for Island and it's considered among his contemporaries as one of Rock's finest singers alongside JOE COCKER and ROD STEWARD. Gary Wright (who is not part of the re-union) is best remembered for "DREAM WEAVER" which was a #1 hit throughout the world and is still heard in movies today, such as "WAYNES WORLD" and currently in "LARRY FLINT". Luther Grosvenor (*12/23/1949) went on to success as a solo artist before joining up with STEALERS' WHEEL and later in MOTT THE HOOPLE (as ARIEL BENDER). Greg Ridley (*10/23/1947) was with A&M records platinum act HUMBLE PIE for their entire 10 album history, and Mike Kellie (* 03/24/1947) formed THE ONLY ONES with PETER PERRETT who recorded three albums for Sony/CBS. Of interest, in September of 1996, Luther Grosvenor released his second solo CD "FLOODGATES" featuring Mike Kellie (which charted on the Gavin Reports Top 40 progressive adult radio charts. "FLOODGATES" is available on RUF as well).