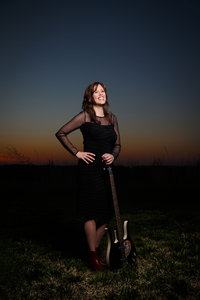 Heather Crosse, a respected bassist from Clarksdale, Mississippi, now releases her debut on Ruf Records. Her band Heavy Suga‘ & the SweeTones has appeared frequently at the world-famous Ground Zero Blues Club and has performed at major festivals, opening for B.B. King, Robert Plant and others. As a singer, Crosse looks to soul and blues icons like Etta James, Koko Taylor and Big Mama Thornton for inspiration.

Her solo debut Groovin’ At The Crosse Roads shows what she's really about. It's all blues – with a soul twist. "I grew up singing Motown and a couple of my blues mentors did a lot of 70s soul. So that tends to come out in the songs that I'm writing," explains Crosse, who co-wrote five of the album's eleven tracks while also paying tribute to heroes such as Etta James and Big Mama Thornton. It's the kind of mix she relies on to get Mississippi crowds dancing on a Saturday night.